Dare I say it but another dull, grey and cold day appears to have arrived AGAIN here in England. I know we English are known for our obsession about the weather but it does tend to set the mood.
BUT today it's cheerful for me inside a warm house and with an inbox full of TIAS. So, here we go with teh first person being Bev who says
"Hi Jane
Playing catch up now. Babysitting a toddler and tatting don’t go together. Hmm, still looks like a seahorse, but I can also see a rabbit.
Bev" 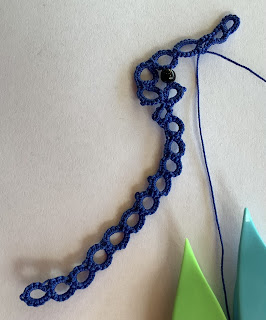 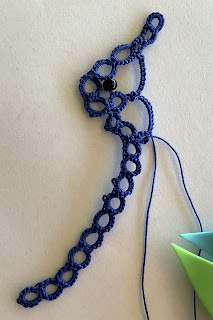 Catrin is next to arrive and she says
"Running to catch up... even took my shuttles out for a drink ! This is days 3 & 4. Now I'm not saying there was a prematurely closed ring at some stage which needed a cut and fandangle but I'm not saying there wasn't.... Hope to get days five and six done tomorrow.....
Warmest,
C"
Actually I'd do the same, Catrin!!!  Shuttles are my companions!!! 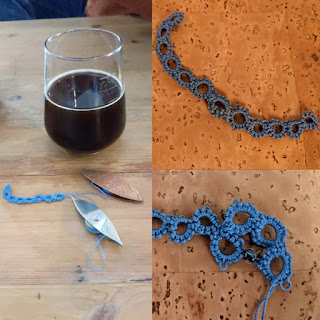 Lussi is next in the inbox and she says this

Welcome
I am sending you the part of day 4" 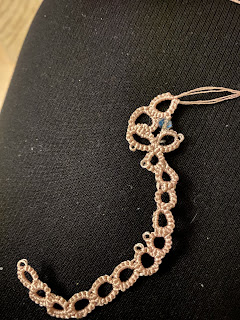 "Następny dzień mojej pracy
The next day of my work" 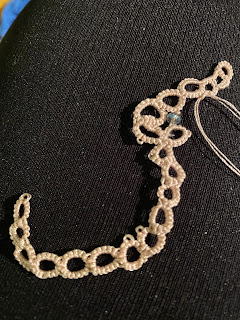 Finally from Lussi and all caught up
"Witaj to zdjęcie mojej pracy ze schematu jaki udostępniasz jestem ciekawa co to będzie może konik morski jeśli tak to wybrałam nieodpowiedni kolor nitki ….ale zrobie jeszcze jednego …mam pomysł na co przeznaczę te żyjątka ….cieszę się ze mogę brać udział w tej zabawie …dziękuję za pomysłowy schemat i miłe frywolitkowanie
Lussi
Hello, this photo of my work from the diagram you provide, I am curious what a seahorse will be, if so, I chose the wrong color of the thread ... but I will do one more ... I have an idea what I will use these creatures for ... thank you for the ingenious scheme and nice tatting
Lussi" 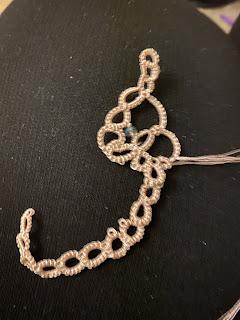 Marina is next in my very full inbox and she says

"The cuteness is starting to reveal itself!
Marina" 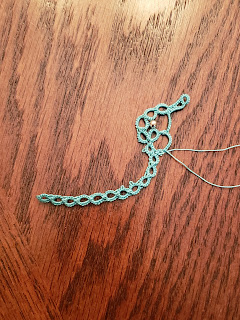 Jacee is next to arrive and this is what she says 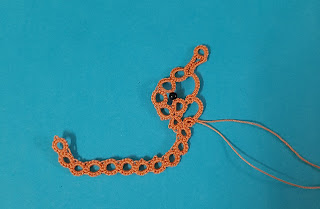 Arlene is next and this is what she has to say
"For now, I'll stick to my crane guess. But I may change my mind.
Arlene M
NC, US"
That's a crane as in a bird, Arlene? 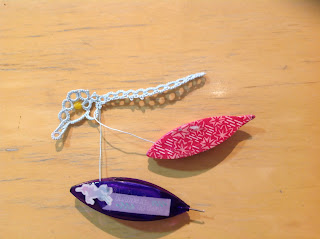 Next to arrive is Valerie from France who says
"Bonjour Jane, Voici mon jour 5.
Jusque là pas de soucis particulier.
Je n ai toujours aucune idée de ce que cela va bien pouvoir être.
Valerie de France
Hello Jane, This is my day 5.
So far no particular issues.
I still have no idea what this is going to be.
Valerie from France" 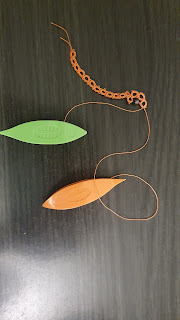 Following Valerie is - well, Valerie!!! This time she says
"Hello Jane,
Et dans la.meme journée car j avais.un.peu de retard voici ma journée 6. Je suis un peu déçu du bec .....de mon canard ?!?.
Bonne journée.
Valerie de France
Hello Jane,
And in the.same day because I was.a.little late here is my day 6. I am a little disappointed with the beak.....of my duck?!?.
Have a good day.
Valerie from France"
I am so sorry about the beak, Valerie - but it may not be a beak!!!!!! 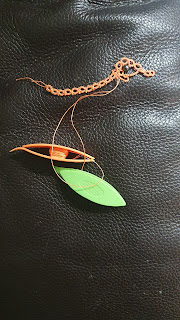 After a morning with friends I’m back with more TIAS’s. First in is Janet who says
“Dear Jane,
Day 5 and my first guess, maybe two Creatures in love

The red and white is my first go of the two. Onwards to tias 6.
Good tatting wishes
Janet” 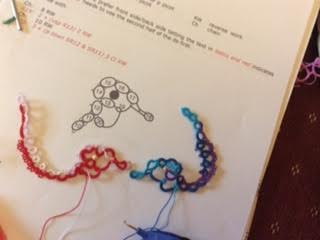 Grażyna is the next person in my inbox and this is what she says
“Witaj Jane
Zrobiłam szybko dzień 6, tylko 2 łuczki i 2 kółeczka.
Teraz czekam na kolejny dzień naszej wspólnej zabawy.
Pozdrawiam Grażyna Paluch z Warszawy
Hello Jane
I did day 6 quickly, only 2 arches and 2 circles.
Now I am waiting for another day of our fun together.
Regards Grażyna Paluch from Warsaw“ 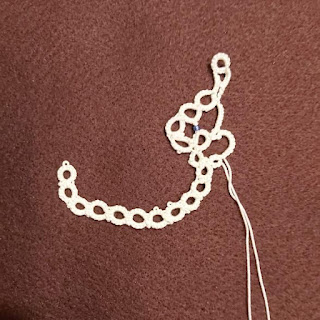 Monica is a new arrival thanks to Alicja. This is what she has to say

Hi Jane, I heard about the TIAS you are doing from Alicja Kwartnik and I got to work ... it is really a very nice idea and I can't wait to continue to see what will come out ... to me too for the moment it looks like a horse marine! Thank you

A warm welcome to you, Monica.  I like your guess too. 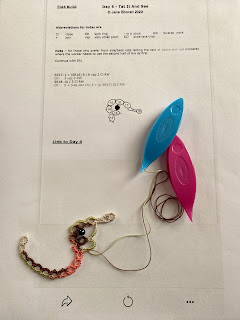 Finally in this batch of messages is one from Sue who has been dealing with other problems in her life. She says
“ Morning Miss.
Forgot to take and send pics as we had to go on a washing machine hunt after ours has decided to flood the floor after around 25 years of use!
I'm submitting what is definitely not an elephants foot umbrella stand again!!! I've never seen an efus blowing a bugle! Lol. Sir says it's a duck or a duck filled fatty puss...(duck-billed platypus)??
So, our guess - a duck filled fatty puss!!”
No comment, Sue!!!! 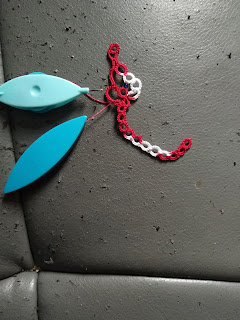 Barbara sounds cross but I know she isn’t really. I’m sorry, Barbara but I’ve no idea where your other emails have gone to. They must be swimming around in cyberspace. You have got them here this time, though, so we must celebrate that.
“Jane, my e-mails to you are disappearing somewhere in space-time. I see you don't write back and I guess you don't see them.
This is the fourth e-mail sent with the same photos. Make it work!
Hallo Jane!
On day 5, the nose was formed. Long, narrow nose. Just like a seahorse.
But it is a fascinating puzzle!
Day 6 confirms my assumptions.
Kisses 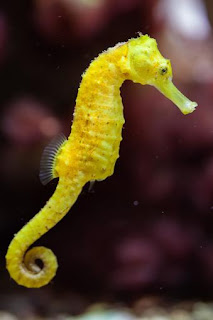 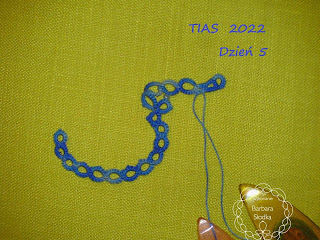 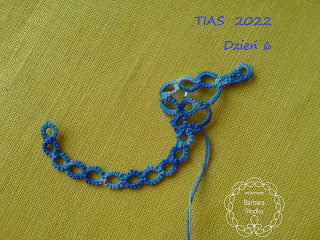 Next to arrive is Marie-Claude who says
“Hello Jane,
On this Day 6, my goose is starting to tranform into some kind of
mythical animal. I wonder what she ate for having such a fat stomach!!
I whish you a good afternoon.
Marie-Claude”
Probably too much Christmas food, Marie-Claude?!?!?  Just like me!!!! 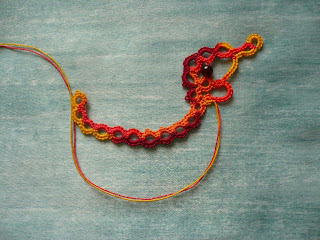 Marina has just arrived with her day 6 and the following comment
“Good morning Jane! Thank you so much. Sometimes it’s a struggle because the hands and eyes don’t coordinate!

Have a great day!
Thanks, Marina. Your tatting is SOOO neat.”
Thank you, Marina. 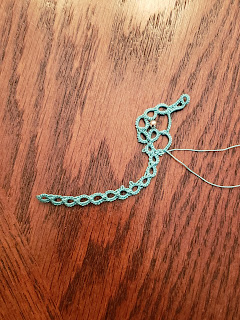 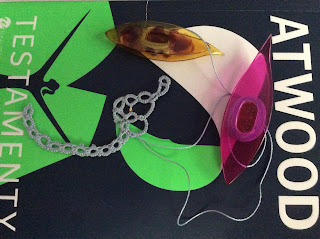 Pamela has just sent in this comment and the pictures too. She says
“Three little Irish thingamagigs popped up for air! From Jackie and me. They can’t wait to get some legs so they can stop squirming!”
Legs?  Hmmmm, that’s an idea!!!  Wonder if I can come up with some? 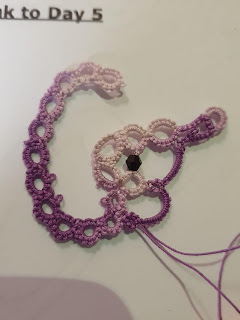 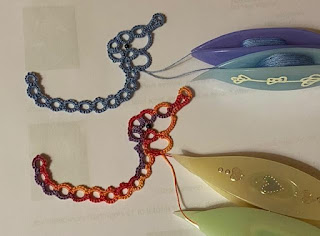 Aonghas’s secretary (Kay Lynn) has now sent in the following with Aonghas showing his best pose ever.
“Dear Jane,
Well, you've taken me away from my "under the sea" guesses, as Hallie in Wisconsin so aptly put it, "the seahorses have cases of mumps" and we know that's not going to work. So, it was back to the guessing game again, and I'm having some real problems on this one. Since we only have one reptile in Alaska (and they're now frogcicles - frozen solid until spring), we aren't that familiar with reptiles across the globe. We are going to guess it's some kind of strange colorful reptile (since so many of the tatted ones are colorful), but we're perplexed by those vsp's on the back and how they're going to work.....You're very "tricky" Jane (as usual), but we know that and your sense of humor are BIG parts of your charm. You are making our brains work overtime with this TIAS.
Aonghas and his momma, Kay Lynn in Tok, Alaska” 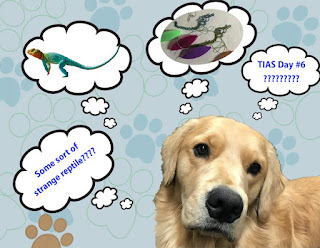 Martha’s back now with her day 6 and this is what she says
“ Dear Jane,
Here's my progress so far. I was afraid the bead was too big, but so far, so good. I gave into the temptation of grabbing the bag of beads on top instead of stirring through the whole drawer searching for the perfect bead.” 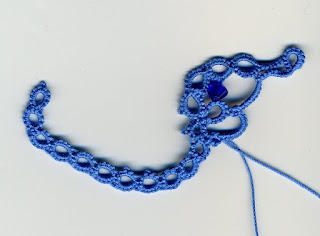 Richard has just dropped into my inbox with his day 6 and this is what he has to say
“Now it looks like it is going to be a dragon or a sea dragon or perhaps an alligator or crocodile.
Richard”
All dangerous creatures, I think!!!! 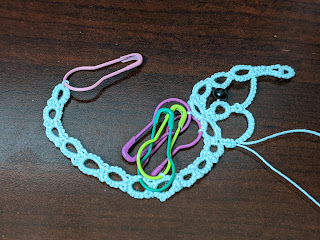 Almost bedtime and I’ve had Alicja pop into my inbox. This is what she says
“ Hi Jane, I’ve forgotten to take a picture of my day 5

Alicja (Italy)”
It must be difficult to remember to take pictures every time.  I forget to take them of my work too. 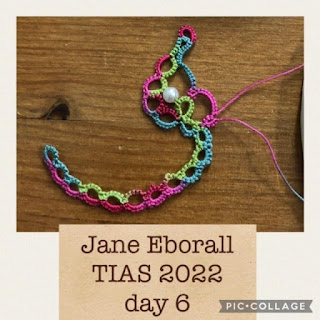