Sunday is supposed to be a 'day of rest' but not in my airport - thank goodness!!!
67.  New landings today start with Patsy who says:-
"Here's my finished TIAS.  Enjoyed making this one.  Guessing this one was a lot easier than the rooster we did last time.  Don't know if I can wait a whole year for the next one.  Hope you come up with one a lot sooner." 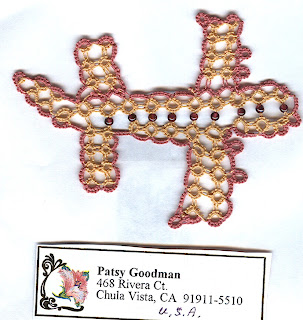 68.  Next to taxi into the terminal is from Carol in the USA who says:-
"It was so much fun tatting your TIAS.  Of course I assumed it was going to be a critter of some sort.  Even to the 9th day I was convinced of this even though people were already guessing an airplane.  I thought it might have been Godzilla.  It is a great looking airplane, a great item to tat for a little boy!  Thanks for all the work you put into this TIAS.  You're the BEST!!" 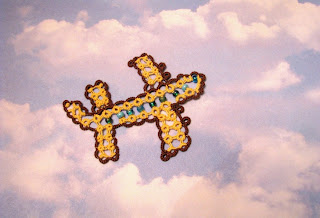 69.  Next in is from Denise in the USA (Texas) who seems to be very excited to have finished!!!  There's also a link to her blog in her message:-
"Yay!! I win! I win!! That is how I always feel when I finish hiding ends for a tatted pattern. I managed to get it up on my blog finally.
Thank you once again for a fun tatting game. This really helped me have some fun with tatting since I put my shuttles down for so long. I think I enjoy tatting along with others more than tatting alone. I hope you do another TIAS again sometime. I'll keep your page in my google reader so I'll see when you start posting the next one.
It really has been lots of fun, but now I have to fly!" 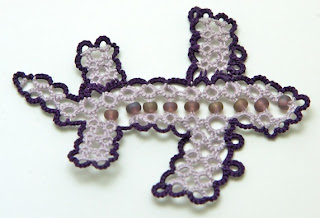 70.  Sunday afternoon and another landing.  This time from Bonnie in the USA who says:-
"Because my computer is still down & I can't get the printer 2 link up 2 the laptop 2 scan I'm still having 2 use my phone ... sorry ... I must admit that I didn't know it was an airplane until I saw day 9 ... thank you for another great TIAS .. I'm already looking forward to the next one .. (is that a big enough plea for another one soon lol). Bonnie Cassadaga NY" 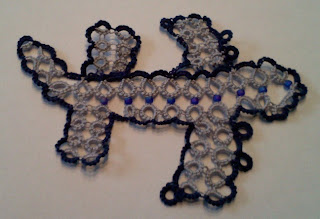 71.  A new arrival now from THE NETHERLANDS and Rita.  She says:-
"Here my plane all the way from the Netherlands.  My name is Rita and I live in Kesteren.  It was very fun to do." 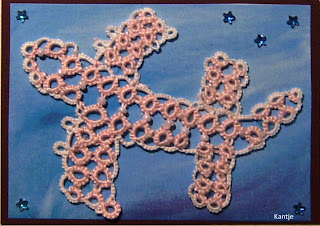 72.  Next in is from Marco from THE NETHERLANDS who has had weather problems getting here!!!  She says:-
"A bit late but I was flying  against a great storm!!!  But finally it arrived safely.  Greetings and thanks again for a lovely TIAS,  hope to  see one in the future again." 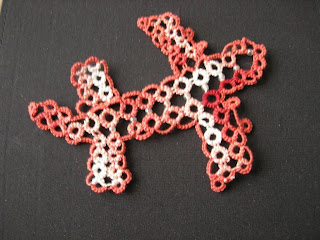