Well I guess Barbara will be surprised as we were discussing the fact on Sunday 23rd January that she'd spotted a mistake in day 4 which nobody else had.  In her email she explained that she was gradually being 'taken over' by shuttles rather than the needles (VERY good news to a MOG like me).  Anyway the tail end of her message was this:-
"It looks a little bit like the tail end of an airplane at the end of day 4. LOL"  Have a great day.. :)   Barb


Katie also said she thought it was a plane but I think it was rather a 'tongue in cheek' guess!!!

Next person to guess right was Terry who said this:-
"At this point, my version looks a bit like an airplane."


On the Tuesday after Day 5 Arlene said this:-
"I think it's an airplane, with bead windows. Am I right? Am I right? Huh? Huh?"


So the guesses continued with some people changing their minds back and forth.  BUT the next message made shivers go up my spine.  It was on the day I released day 9 and was from Anke.  She said this:-
"here comes my day 9 and now I also think it must be a airplane. It looks just like the one on the attached picture."
The picture (below) which she sent was the very same one I used as my design source.  The only part I changed was the tail fin - just because it looked better being more pointy!  I do use several pictures when starting off on a critter or other object but usually there's one that stays on the page while I'm tatting and this 'was it'.  Well done, Anke. 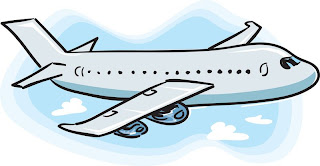 Now to the new arrivals at Airport Jane on this fine Wednesday morning are:-


44. Anita is first in today with a gorgeous picture with her plane.  She says:-
"It is with fondness and a little sadness that we say goodbye to Perky the Pert Little Plane as he flies off
Thanks for another great project.  Your instructions and diagrams are always a joy to follow." 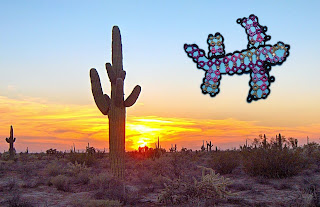 45.  Now in is another plane from the USA and this is Sharon P's.  She says:-
"Waaaaaahh! I dawdled over this last day, because I didn't want the TIAS to end! Sniff.   Thanks for the fun and mystery! And for all the time and effort you put into these!
happy regards,  Sharon (North Carolina, USA)" 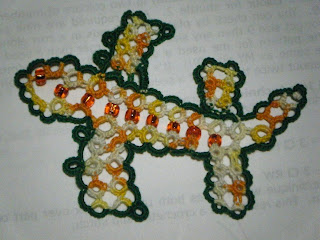 46.  Next plane is from THE NETHERLANDS and Corina.  She says this:-
"Thank you for sharing this nice project, with such an unexpected result! Here's a picture of my aeroplane.  Greetings from the Netherlands, Corina." 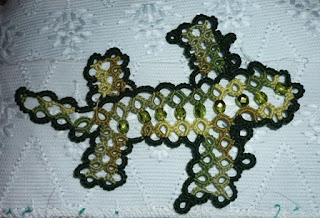 47.  Next in is from Martha in the USA.  She appears to have been puzzled over the motif for a long time.  I do post correct guesses, Martha but I don't say if they're correct or not!!!!  I'm a terrible tease!!  Martha says:-
"Sneaky, sneaky Jane.  I've been scratching my head since about Day 5 trying to figure out what animal has hind legs and tail that look like an airplane.  Somehow I had gotten the notion that you didn't post correct guesses, so when I saw so many people saying plane, I kept on wondering what else it could be.  Really cute motif! " 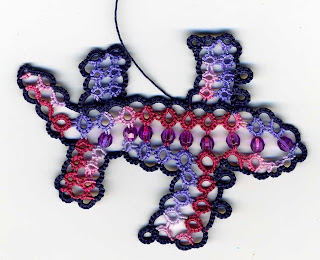 48.  Next to land is Vanessa's plane and she says:-
"Thanks for doing the TIAS again :)  It's always fun doing these types of things.  And community building too.  Here is my plane (I thought it would be a lizard.....)  Kind regards Vanessa" 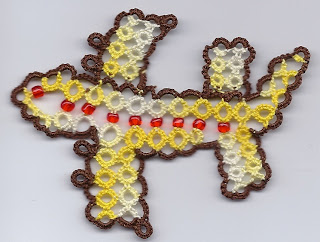 49.  Next in is from Tine in THE NETHERLANDS.  She says:-
"Hello Jane.  This is mine Aeroplane.  Thanks for the tias, I cann't wait till the next one.  You are a magician with tatting.  Greets from The Netherlands." 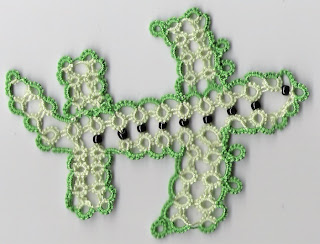 50.  Next in is from Linda with another great picture.  She says:-
"The day has finally arrived!! I have finished my surprised TIAS to see a plane.  I have a special place for it  on a challenge wall hanging.  Thank you Jane Eborall for another interesting challenge and breaking up the dull, cold, winter doldrums!!  Linda" 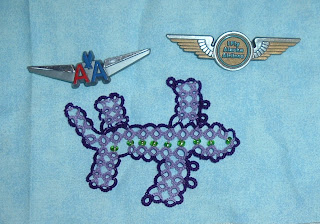 51.  Now for a very sad story from Isabel in SPAIN who has had problems with her last wing.  I'll let her explain:- 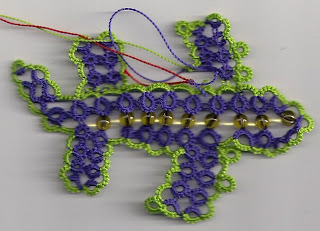 52.  Next to land is a plane from 'down south' here in the UK.  It's from Wendy who is a cheeky moo and says:-
"Here is my little aeroplane.  So cute, thanks for doing this for us. I am in England, although I know you know but you did ask  lol." 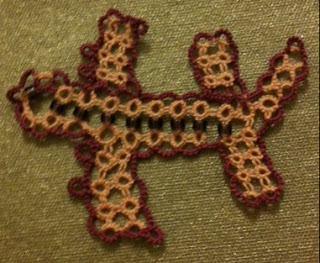 53. Next on the runway making a perfect landing is the plane from Liz in AUSTRALIA.  She says:-
"Awesome plane – thank very much Jane for this.  It was really so much fun and easy to manage" 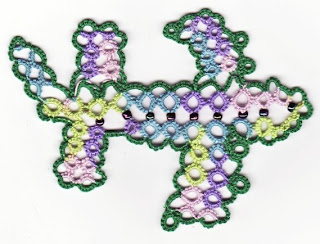 54. Next flight to arrive is from Nicole who says:-
"ok here is my plane! My son loves it... It was completed Monday but ..... Life.... So I was finally able to get the pic off to you today. Thanks for the fun tatting project!" 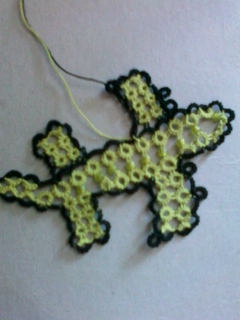 Jane, I did NOT believe it was a plane and so I googled "airplane" to compare my tatted Day 9 with it. And there it was - a plane just looking like what we had done the last days! So nothing but sheer luck (OK... and Google) let me guess "airplane" send the photo to you!